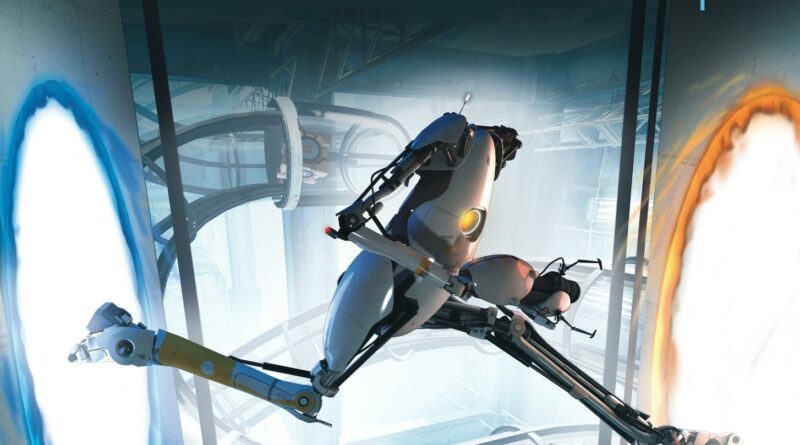 The original Portal was a masterpiece. After such a work, Valve’s attempt at bringing a full-scale sequel was highly anticipated. Unfortunately, that means that Portal 2 has the awful fortune of having to live up to what I consider to be a pinnacle of game development. That embodies a lot of expectations to live up to, and a lot of room to screw it up.

Additionally, Portal 2 is also the first Valve title to include interconnectivity between PC/MAC and Console gamers via Steamworks on PS3. This is a great move forward for the gaming world, and many hope it represents the future of the gaming industry—including myself. I got around to playing the game a lot later than most people, but I took the liberty of playing both versions of the game. As such, this review will cover and compare both.

The single-player campaign in Portal 2 starts out on a great note: You’re introduced to Wheatley, a new personality core, via hilarious dialogue that is partially influenced by the player’s actions. After this, the game immediately throws you into the first set of puzzles for you to solve. This section plays very similarly to the original Portal, except now the environment the player is in looks like a shell of its former self.

Wheatley managed to conjure up dialogue that amused me throughout the course of the game and quickly became one of the reasons I wanted to keep playing. This trend continued with other characters as well: Both GLaDOS and Cave Johnson, a character that was only briefly referenced in Portal, have witty and humorous dialogue. In keeping with the original game, much of that humor is dark.

Personally, Cave Johnson was the single most entertaining part of the game for me. His lines are delivered at precisely the most opportune moments, and J.K. Simmons delivers his lines in a way that vocally paints a picture of Cave. Throughout his pre-recorded messages, Simmons uses his animated voice acting to portray the story of Cave Johnson’s life and company, and that he won’t take shit or lemons from anyone. The beauty in his lines comes not only in the writing, but also in the very particular way Simmons uses pitch, volume, and general gruffness to deliver them. Cave’s animated and frank personality complements that of the precise and mechanical GLaDOS; and at certain points near the end of the game, the dialogue of Cave, GLaDOS, and Wheatley was the only thing that quelled my anger and kept me from smashing my keyboard or throwing my controller into the television screen.

That brings me to my next point: the gameplay. The beginning starts out much like Portal did, though the environments look different due to the storyline. However, as the game progresses, the environments and puzzles change. New mechanics such as the thermal discouragement beams, aerial faith plates, hard light bridges, excursion funnels, and conversion gels gradually enter the picture, and the environments the tests take place in are wildly different as a result. The addition of new mechanics, I enjoyed. The environments in which they were introduced, I did not.

One of the nicest things about Portal was that each chamber took no longer than about ten minutes to solve. I’d get stumped occasionally, but after approaching the problem from a different viewpoint or searching the room a little more thoroughly, I would find a solution. The problem with Portal 2 is that some of the environments, especially in the last few chapters, are so large and dull-looking that the things you need to solve the problem are easy to miss. I spent a ridiculous amount of time on one chamber in multiple instances not because I didn’t understand where I needed to go or what mechanics to use to get me there, but rather because I couldn’t find everything I needed to accomplish the feat. This is also partly the fault of some mechanics (e.g. the conversion gels) which are hard to control and sometimes behave in unexpected ways. However, I noticed this issue was most prevalent in the retro-tests.

I also feel that the number of tests that focused on one new element was sometimes excessive. After doing a multitude of conversion gel tests, I found myself growing tired of them, wishing they would end and new mechanics would be introduced. In the end, these continued for an entire two chapters of the single-player campaign.

Oddly enough, I didn’t really encounter these issues in the co-op campaign. What I did discover was that the co-op mode requires impeccable timing and extremely high levels of cooperation between you and your friend. This highlighted a major issue with the console version: reaction times. In the PC version, your ability to react quickly depends not only on your dexterity, but also on your mouse sensitivity. You can easily shoot a portal in front of and behind you within the span of about a second if required. On the console, however, this is impossible. The analog sticks on the console version move at a more sluggish speed in comparison to when I played the game on the PC. This impeded my reaction times and made certain puzzles artificially more difficult. This was exacerbated by how portal placement had to be awfully precise in some cases due to either the distance or the size of the target.

Ultimately, the co-op mode of Portal 2 will either make you best of friends, or drive you to want to smash things. It requires—I mean seriously requires—that you to work as a team. It’s simply not possible for one person to do all of the work, and if your teammate really doesn’t know what they’re doing, the game can be infuriating. On the bright side, the co-op campaign on the PS3 allows you to play with Mac and PC users as well. This also allows you to earn achievements on both PSN and Steam and chat with your friends on the latter. Sadly, this simply does not make up for the subpar controls. Although the ability is there, I will likely utilize the PC version to play with other people.

Unfortunately, playing with someone who’s never played the co-op campaign before isn’t much fun for your partner. People tend to get snippy when you point out the right answer after they’ve failed a few times. Additionally, there’s still no DLC for the game despite Valve saying they’d release some mid-September, though that shouldn’t be a surprise given they run on Valve Time. Unless you like doing the same puzzles over and over again, the co-op mode has dissatisfying replay value. Granted, there are achievements, but one can gain only so much enjoyment from a silly virtual badge.

Overall, despite its shortcomings, Portal 2 is a fantastic game and extremely entertaining. I don’t feel it quite lives up to the original Portal’s legacy, but not much could. That said, what Portal 2 does well, it does really well—so much so, it becomes easy to overlook the nuances. As a final note, the Turret Opera is much, much better than “Want You Gone.”

CONS
* Sluggish controls on the PS3
* Somewhat repetitive at certain points
* The larger, open-air test chambers can make it hard to spot devices needed for the solution

Disclaimer: This game was purchased by the reviewer, and was not sent by Valve. The PS3 version of the game came with a free code for the PC version. At the time of writing, the reviewer had completed both the single-player and the co-op campaigns and played them on both systems. In addition, 49% of the achievements in the game had been unlocked.