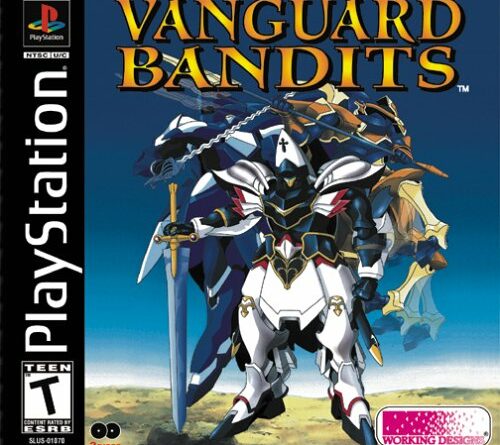 I enjoy strategy RPGs. Some of my favorite games include the Fire Emblem, Disgaea, Advance Wars, and Final Fantasy Tactics series. Given this, I thought Vanguard Bandits would provide a good chance to play an older and lesser known SRPG, so I jumped on the opportunity to review it.

Vanguard Bandits, known as Epica Stella in Japan, is a PS1-era mecha strategy RPG. The game introduces some interesting and unique mechanics into the SRPG genre and has a decent amount of replay value for a $10 game on the PlayStation Network. The plot of the game is rather clichéd, but fortunately, the gameplay is solid.

Vanguard Bandits tells the story of a land filled with constant battles and tragedies. The continent of Eptina was in constant turmoil until the Pharastia Kingdom discovered the mecha known as All Terrain Armored Combatants (ATAC) via an archaeological excavation. The Kingdom united the entire continent using the power of the ATACs; however, after a while, the infighting and battles resumed. Several countries exist on the continent, but by the time the game starts, the Junaris Empire is by far the largest and is presented as the main evil force in the game. The plot follows a young boy named Bastion in his fight against the Empire.

Unfortunately, just about everything to do with the plot feels clichéd. The characters fall into pretty clear archetypes as well, from the young male main character who learns of his ultimate destiny, to the bossy princess, the childhood friend, the old Yoda-grammar using character, the young super-genius mechanic boy, and the food-brained fat kid. If I had a dollar every time I saw Barlow say something about food… though, I suppose it could be worse. The strategy guide provided by Monkey Paw Games notes that, in the Japanese version, Barlow spoke of literally nothing except cake. There’s also the fact that literally every female except Ione have a thing for the main character; it’s as if he has so much testosterone that his mere presence is enough to impregnate women.

Aside from being clichéd, the dialogue also feels rushed. There are some dark moments in the game, but they don’t have the emotional weight they potentially could have had if they’d been given more than just a single dialogue box of text. It almost feels as though there isn’t enough dialogue to make it seem realistic. Over all, I can’t really bash the game too much for having a subpar plot: this is a product of the 90’s and is about par for the course. The game is also of the SPRG genre, and let’s face it: 90% of SRPGs are somewhat lacking in the plot department. However, I will say it’s actually not hilarious to hear Halak talk about how she “filled her Depends with joy.” There are some things that go better left unsaid.

Although the game does not possess a fantastic plot, it does excel in gameplay. Vanguard Bandits has quite a bit of depth, and this proves to give the player a chance to be as meticulous as they want to be with their characters. When the game initially starts, you have two characters. You gradually acquire more, and the number of enemies you face continually increases. However, I did not expect the game to allow you to switch ATACs between characters. Although there are a few characters that cannot have their ATACs exchanged, the majority can. This provides some great flexibility with your characters as they’re not locked in to one set of attacks or weapons. New and more powerful ATACs are also “excavated” throughout the game, allowing you to upgrade the machines of the characters you get early on in the game.

The battle mechanics are simple yet surprisingly good. The gameplay revolves around two types of points: Action Points (AP) and Fatigue Points (FP). Action Points allows you to move, attack, or use a skill and is consumed by these actions every turn. Each character has his/her own AP bar that starts at 100 AP each turn, which usually leaves you enough to move and attack in the same turn. The possibility exists to move twice in the same turn, but because of how much AP attacks consume, you’d likely not be able to use this after a very strong attack. Fatigue Points are also important: Each action, whether attacking or defending, gives fatigue points. The bar goes up to a max of 100, and when it reaches this bar, the character in question is “dizzied.” Stars appear around the character’s head, and any attacks on this character will have a 100% hit chance. This prevents you from attacking and defending with a character at every opportunity as doing so will make the character highly vulnerable.

The subject of vulnerabilities brings another mechanic to the forefront: positioning. When you move a character, you’re given an option to pick the direction they face. This is important because being attacked from different sides limits your defensive options and gives bonuses to the attacker. In general, there are four options for defense: attack, defend, avoid, and counter. The attack option does just that, allowing your character to attack back. On the other hand, the defend option allows you to mitigate most of the damage being done at the cost of being able to deal return damage. Avoid allows you an increased chance to dodge the incoming attack, taking no damage at all. Counter provides a chance to parry the incoming attack, dealing quite a bit of damage to the attacker in return. Being attacked from behind allows you to only avoid and gives a huge hit chance bonus to the attacker. The rule of thumb in this game is to always protect your backside. Failing to do so can easily cost you a character and quite a bit of morale. Morale is important, but I’ll touch on this later. Being attacked from the side only eliminates the Counter option, which means this option is only available when being attacked from the front.

I really enjoyed the battle mechanics; I’m used to not being given much in the way of options when being attacked in SRPG games. Unfortunately, I found the RNG to be pretty far off from the hit chance occasionally. This is the only game I’ve seen in which a 100% hit chance means you can still miss. This happened to me not once, but twice. Bandits manage to freshen things up a bit by allowing you a variety of options in this scenario, adding much to the general tactics of the SRPG genre. The use of positioning mechanics also adds to the challenge of the game, which is greatly appreciated. Although character “deaths” are not permanent, the game encourages the player to avoid losing characters by use of morale ratings. In order to get the best endings, one must keep the average morale rating of their team good or above. This presents a challenge to the player because some characters’ morale is easier to raise or lose than others. Devlin is a good example of this: he has somewhat of a rivalry with the main character, so if he is destroyed in battle, his morale drops faster than a lead balloon. I was personally lucky enough to be able to keep Devlin’s morale good throughout the entire game, but the one or two times he lost in combat, his morale did drop quite a bit.

Another challenge presented by the game is the inability to heal any of your units until about halfway through the game. Up until this point, you really need to be careful about how much damage the characters take; otherwise, they will get wrecked by the opposition. In general, the game presents a lot of tools, mechanics, and challenges for the player to indulge in and develop strategies for. It is in this manner that Vanguard Bandits excels in gameplay.

The soundtrack for the game is nothing special. For the majority of the game, tracks are consistently recycled. In fact, even now as I write this guide, I can’t recall particular tracks. The endgame provides more as far as soundtrack is concerned, but over all, the game is completely average in this area. However, I will mention one thing that drove me crazy regarding sound: the sound effect utilized for the use of skills is obnoxious and almost painfully loud and high pitched. I play my games on a 9.2 (via an Onkyo receiver) surround sound system, and although the extra speakers are not utilized with an older game like this, this particular sound effect was LOUD. I found myself covering my ears every time I used a skill, and considering the ability to heal your characters is a skill, I did this quite often. There is no reason that such a noise should have been used as a sound effect. I imagine this isn’t an issue on lower-end systems without a fantastic high-frequency response, so take it with a grain of salt, but by the gods this was awful for me.

The replay value of the game is pretty good. There are five endings to the game spread across three paths and fifty-six missions. Each of these paths provide a better perspective from each side involved in the story, and two of them have a good and a bad ending. Unfortunately, one problem with this is that the method of choosing one of the alternate paths is not obvious. One of these is activated by getting Bastion to a high enough level by a particular chapter, but you’re never given any hints about this. Thankfully, Monkey Paw Games provides a free guide downloadable from the Working Designs web site, so this mitigates the issue as long as the player is willing to utilize this.

Overall, the game is good. It’s got its problems and suffers from mecha-anime-plot-cliché syndrome, but over all, the far superior gameplay makes up for it. Additionally, although the majority of the plot is clichéd, it’s an interesting world and is somewhat intriguing to view it from different perspectives; the three paths provide this. All in all, if you’re into SRPGs or retro games, Vanguard Bandits is worth a look. The dialogue may also prove quite amusing if you like cheesiness.

Disclaimer: The reviewer was provided with a copy of the game by Monkey Paw Games. At the time of writing, the reviewer had completed the game and received the good Kingdom ending. A second playthrough had been started to attempt the Empire route.