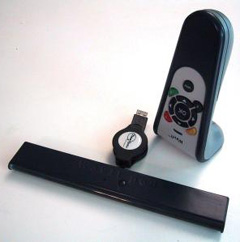 California-based ThinkOptics has filed a lawsuit against Nintendo, as well as Nyko Technologies, GameStop, Wal-Mart, RadioShack, and JC Penney over alleged patent infringements for infra-red motion tracking. ThinkOptics manufactures the WavIt remote, a remote designed to control a variety of media devices and collaborate that with internet content wirelessly. They also developed the iWavIt app for the iPhone, which does the same thing. They allege the WiiMote infringes on their patents, and by proxy the Wii and Wii U do as well.

This suit was filed in the U.S. District Court of the Eastern District of Texas, citing U.S. Patent Number 7,796,116—a patent for “Electronic equipment for handheld vision-based absolute pointing system,” which was filed for on July 21, 2005 and had a final patent date of September 14th, 2010.

ThinkOptics has requested a jury trial and claims that Nintendo knew of the possible infringement from the start:

The rejection of […] applications — assigned to Nintendo Co. Ltd. — based on the ’116 patent is proof that the Nintendo defendants knew or should have known of the objective risk that one or more of their products infringed at least one claim of at least the ’116 Patent

Analysis: At first glance, this appears to be yet another patent troll. All the signs are there: East Texas filing, filed long after the product has been out and making money, filed by an unheard-of company, and big name companies named as defendants. Without a deeper look, this appears to be another drop in the bucket.

However, it is extremely important to note the dates involved in this matter. All three of ThinkOptic’s patents were filed on July 21st, 2005—two months before the announcement of the WiiMote at the 2005 Tokyo Game Show. It is important note, however, that the initial provisional patent was applied for on Jan 12, 2005. A provisional patent application is required in order to secure a priority date. The filer then has a year from that date to file the official patent and takes precedence over other applications filed in this time. This means that although the official application was filed only 2 months before the WiiMote’s announcement, the patent was initially conceived 8 months prior—a significant difference. There would have been no way for Nintendo to know this patent existed until either July 13th, 2006—when it was published—or they applied for a patent and were rejected based on a pre-existing application/patent. The latter is what ThinkOptics alleges happened. In this case, Nintendo should have immediately sought a simple license but failed to do so. Finally, the WavIt remote was released in autumn of 2006. Conversely, the Wii was not released until Winter 2006.

To clarify what the infringement is, the patents cited by ThinkOptics detail in-depth the process of using an infra-red remote and a sensor bar to track cursor movement on a screen. The patents each include about 25 pages of description including formulas for the determination of position on the screen via angle geometry, description of the particular hardware devices in the solution, and other detailed theory. Between the three patents, much of the description is the same due to how patent applications are written.

In the end, it depends on how patent law is interpreted. Patents are supposed to protect original works, so depending on when development began on the Wii and the WavIt Remote, the earliest should win. However, in many cases the law is interpreted such that the one who filed for a patent first wins. Unfortunately for Nintendo, this is likely to be the outcome. This is aided by the fact the suit was filed in East Texas, which is notorious for siding with the claimant.

The final question that remains is, “Why East Texas and what about the other companies involved?” Usually, a company located in California would file suit in California. However, given the size of ThinkOptics, it is likely that they filed in East Texas as a guarantee. Nintendo is a large company with more legal clout than a small tech company operating out of San Jose. Nyko and GameStop are likely involved because of their third-party hardware manufacturing, but the involvement of Wal-Mart and JC Penney is confusing. They are involved likely for carrying an infringing product. We have contacted ThinkOptics for comment, but due to legal issues, they cannot comment directly on the matter.

Ultimately, based on the fact the patent was applied for before the WiiMote system was announced, the product was released first, and operates off a highly similar technology, I think that ThinkOptics has a legitimate case. Many will bring up that it’s been five years already, but in reality, it’s been less than a year since ThinkOptics’s patent was finalized. For the first time, I think this issue has been viewed by the tech community via red-colored “Patent Troll Witch Hunt” glasses. I believe this has been mostly aided by the location of the suit and the names involved. It is important to note that most genuine patent trolls do not actually produce a product. ThinkOptics does.

Note: This article was updated on Sept. 10, 2011 in order to include additional information regarding the dates surrounding the patents.